So I've been knitting away on my Fourth Doctor scarf in hopes of having it ready for the upcoming New York Comic Con, unfortunately though I don't think that I'll have it ready. So in the meantime I've created a couple of other knitted creations to wear instead and show my Whovian pride with.

First up is a pair of fingerless mitts inspired by the infamous scarf. I learned some lessons the hard way as this was my first time changing colors while knitting in the round on some DPN's. Unfortunately this mistake is rather obvious when I decided to color change directly from stockinette to ribbing, but oh well, I still do enjoy them. 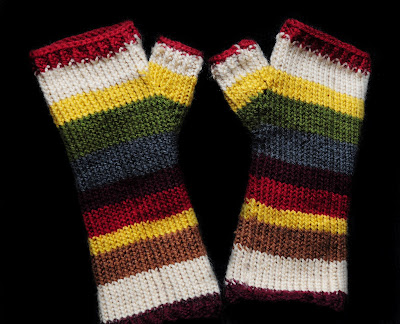 And I finally broke out the size 1 DPN's and some crochet thread to create a mini bowtie pin to wear, which was a lesson in patience when knitting in such a small gauge. 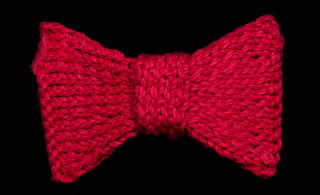 I need to figure out to knit something from the 10th Doctor, as well so all three of my favorite Doctor's will have some sort of knitted representation. I also plan on knitting one of the hats worn by Emma in Once Upon a Time as I've recently gotten into that show now as well, but I'll have to see if time permits.

Can't wait till the NYCC!