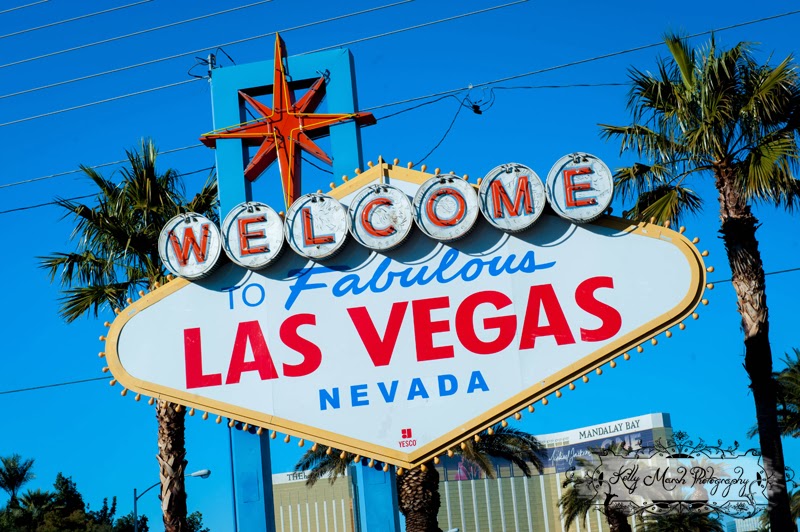 After an early morning flight from JFK on Virgin America I had finally landed in Las Vegas to begin, what I hope becomes, a new birthday tradition. What is that new tradition you ask? Well, I plan to spend every birthday in a new place I haven't been to before, and if that place is warm and void of snow, all the better. And since I would be going solo, I thought for my first adventure I'd chose someplace that would be a little safer to travel to and is known for solo travelers (mainly due to the large convention scene there).

So, back to the trip. After arranging a pick up/drop off from McCarron Airport to my hotel, the Luxor Hotel and Casino, with Super Shuttle ($16 round trip), I finally arrived and basked in the warm rays of the sun before checking in. I had done a whole bunch of research and read that checking in could take a bit of time, however, Super Shuttle dropped me off at the side entrance and voilà, there were no lines and check in was a breeze.

After getting my room key complete with coupon book (with coupons for both the Luxor and the connected Excalibur Hotel and Casino) and instructions on how to find my elevator, I made my way to my room, a King Pyramid Deluxe, and was not disappointed. My room was situated on the 17th floor with a view of Mandalay Bay and The Hotel, which provided me with one of the most beautiful views of sunset as the passing airplanes silhouetted by the sun's last rays passed over the mountains in the distance. 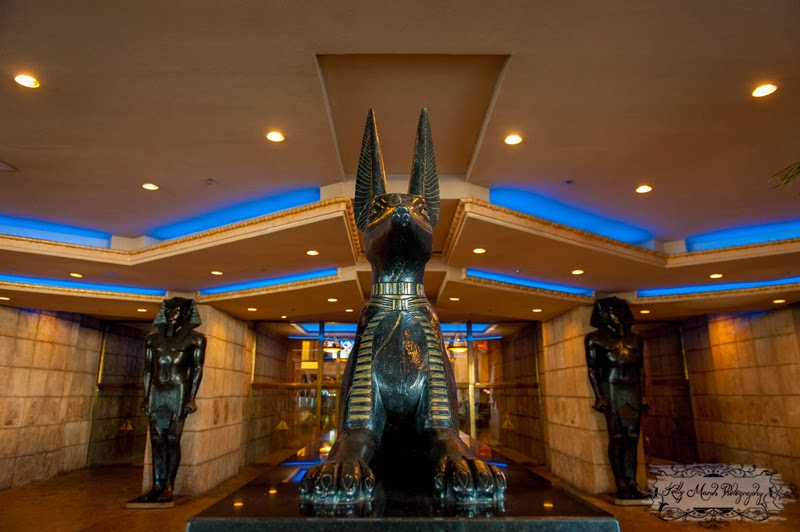 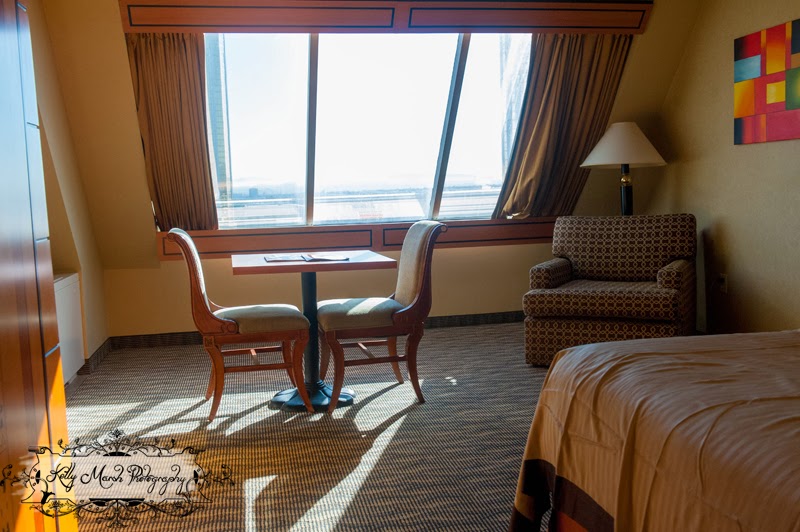 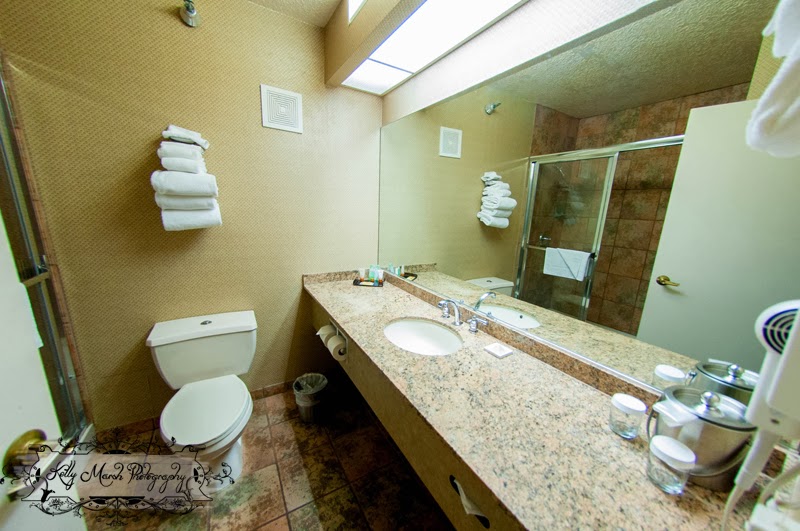 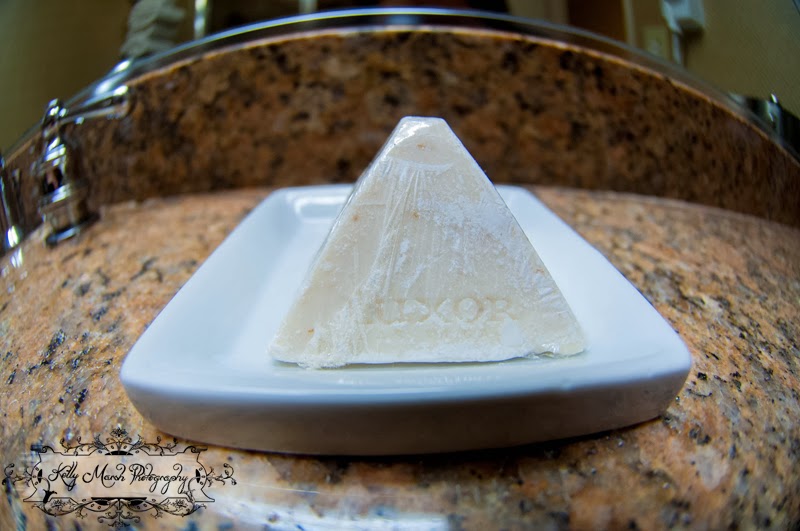 Not wanting to waste too much time I decided to walk around a bit, grabbed my camera and went out. And naturally in my own true style promptly got turned around and lost. Perspective in Las Vegas is a little skewed when walking through some of the largest hotels on the planet. It wasn't until I reached the front of the Luxor that I realized the last true "meal" I had was an egg white breakfast sandwich from McDonald's at 6:30am. So I went back inside the Luxor in search of some actual sustenance and libation. 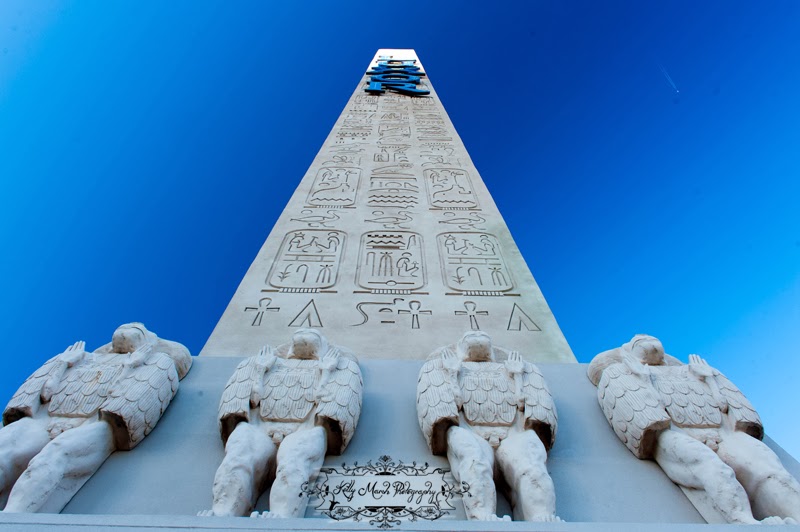 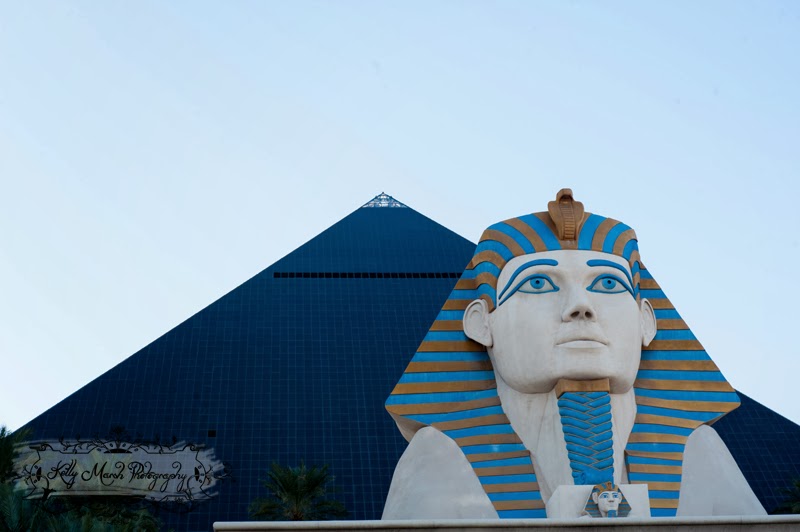 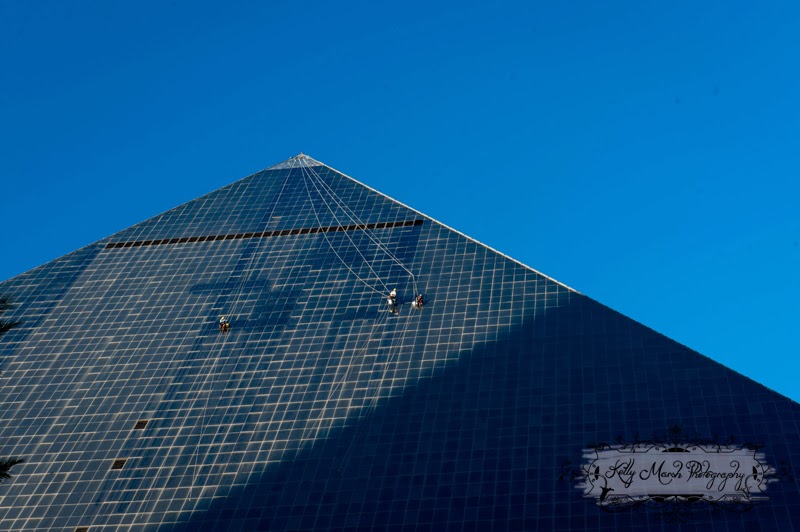 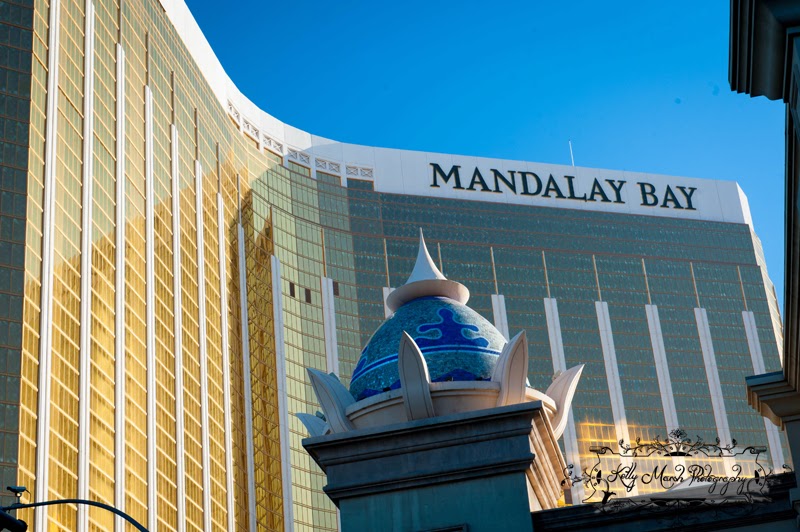 My first Vegas meal was at the delicious Tacos and Tequila where, due to my waiter forgetting to place my order, of which I was blissfully unaware while snacking on the complimentary chips and salsa, my second glass of sangria was on the house. Not too shabby a way to start out my Vegas adventure.

After dinner I went up to the room, got my camera ready, watched the sunset and then started my first foray down the ever famous Las Vegas strip. 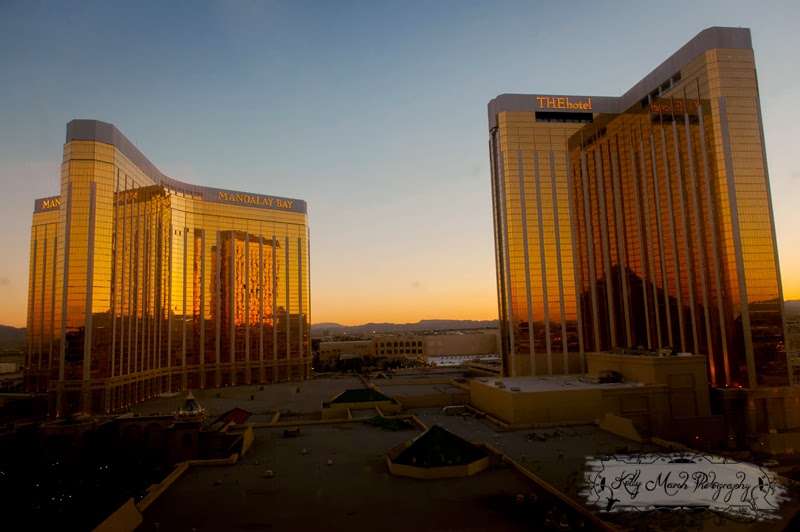 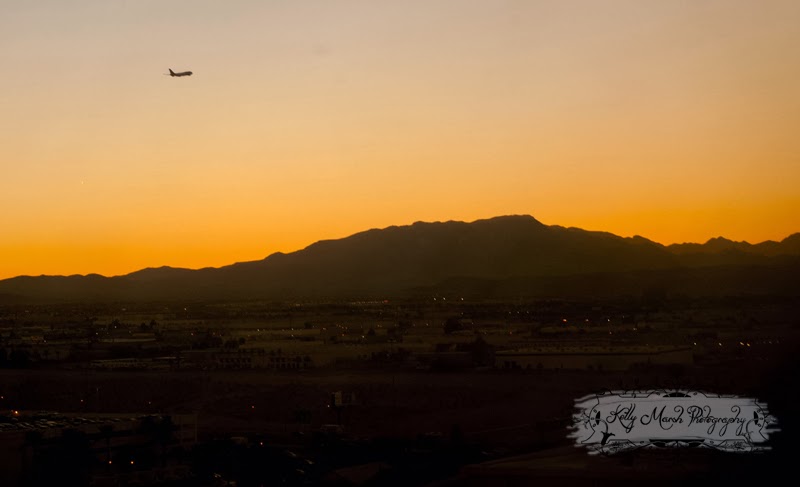 As I started to make my way down the strip I quickly learned a valuable lesson: things look a lot closer than they actually are. Although the people movers between connected hotels and escalators make the journey up the the strip a wee bit easier, the Luxor was rather far from the action. Still a bit jet lagged, I walked all the way to Caesar's Palace, making the customary Hangover jokes when I arrived before turning back and heading in for the night to catch upon some Z's and get acquainted with the time difference. 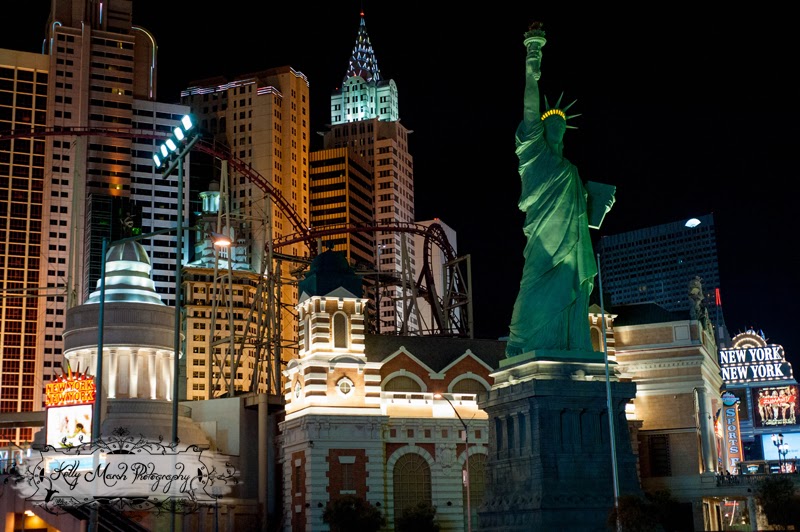 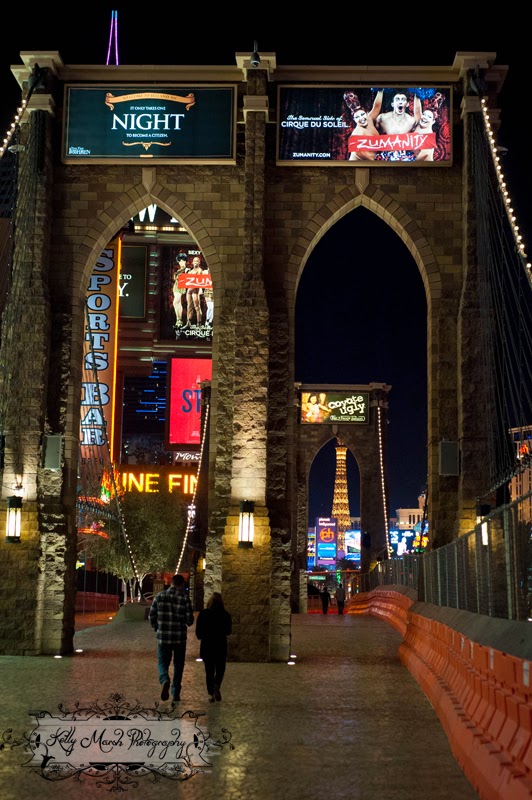 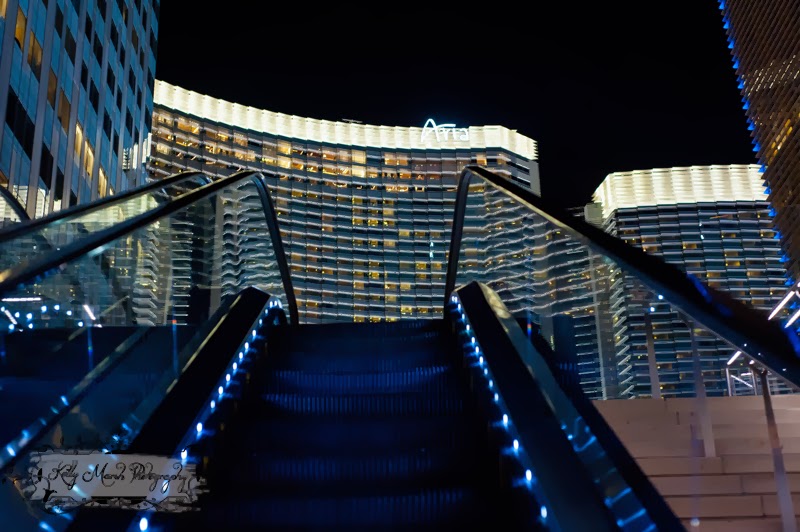 Escalator up to the pedestrian walkway to cross the street. 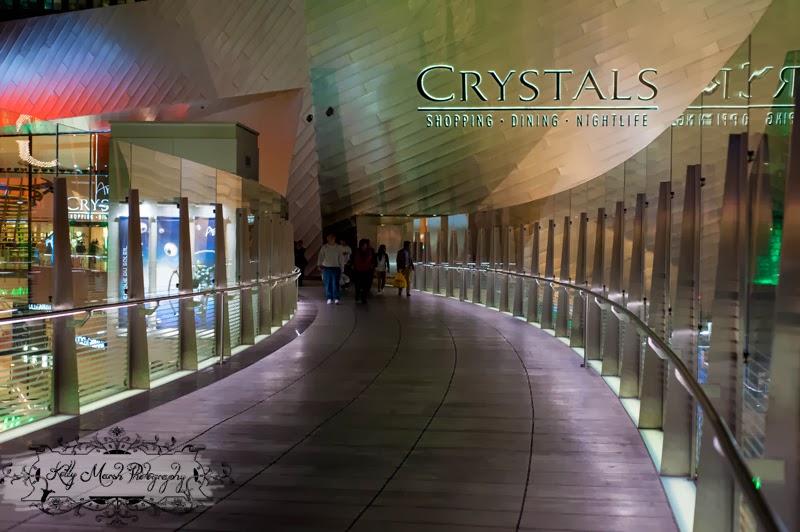 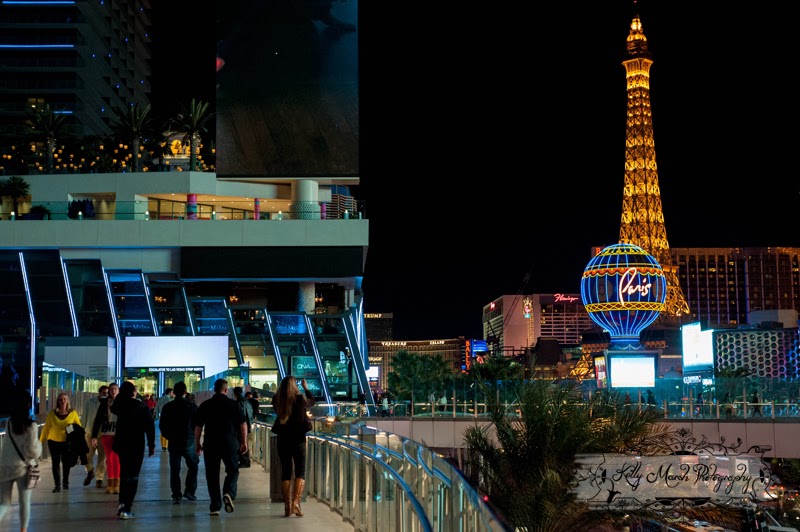 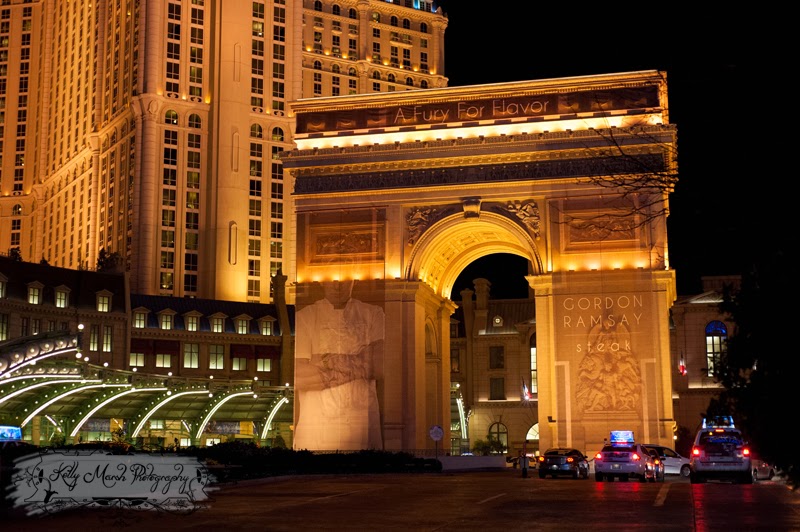 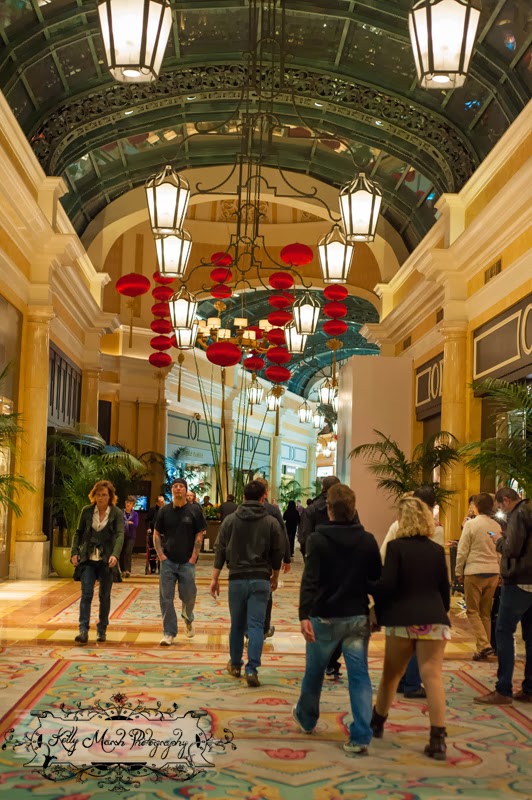 The Bellagio was decorated to celebrate the Chinese New Year. 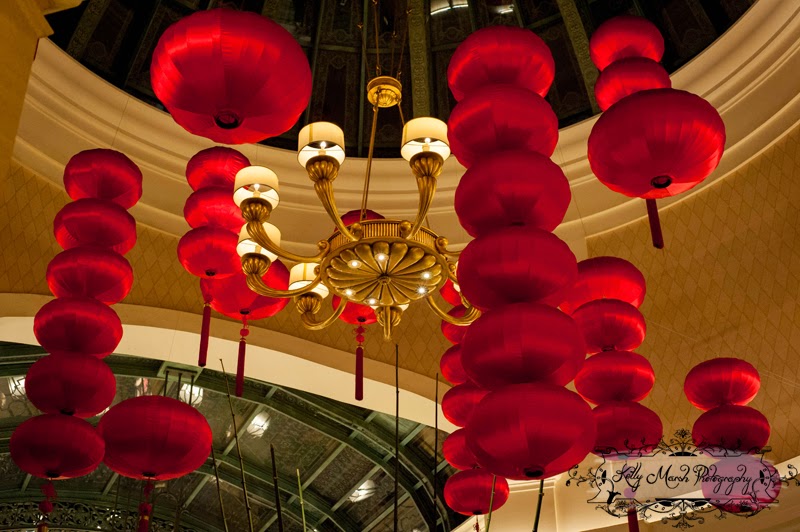 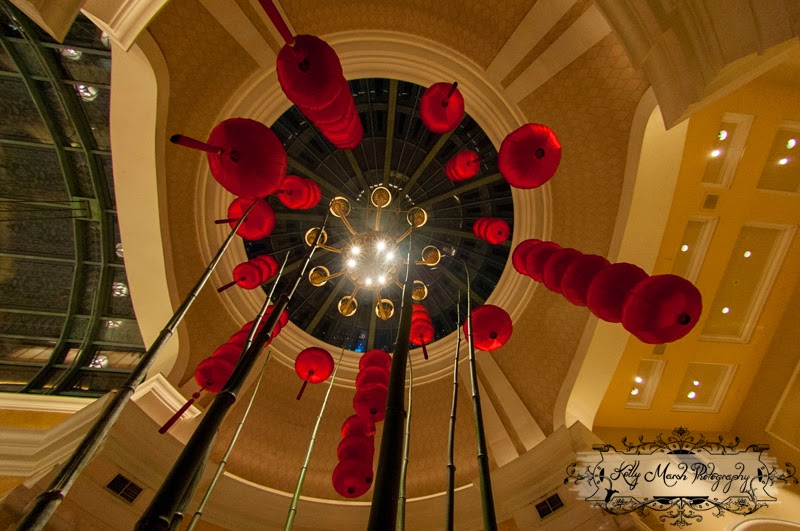 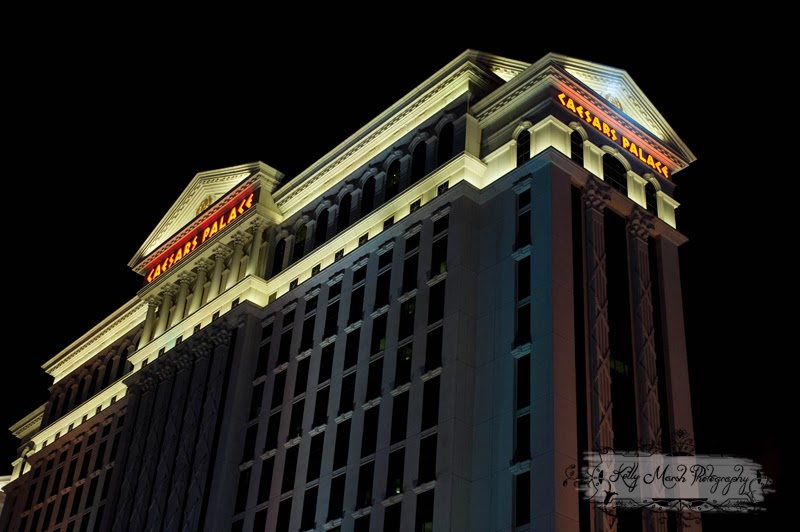 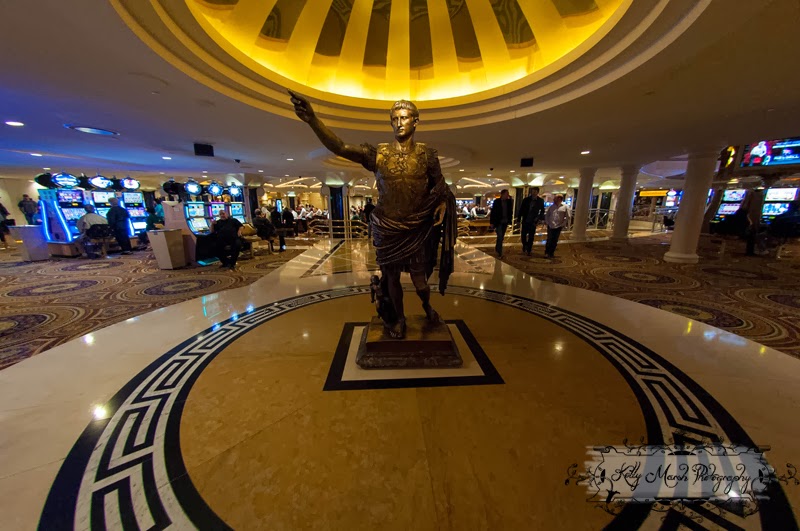 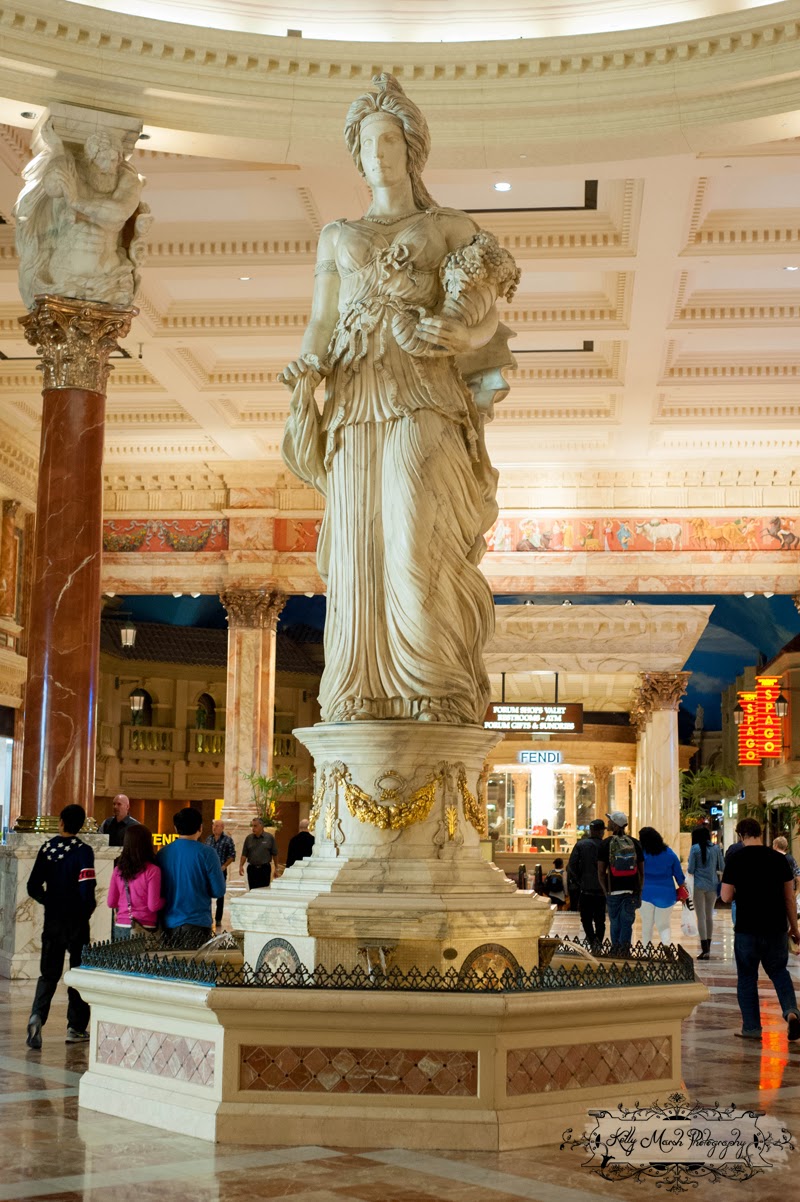 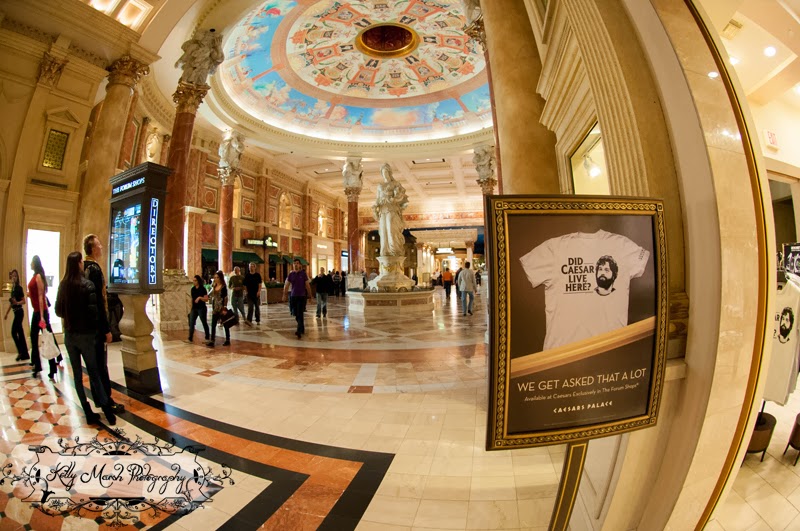 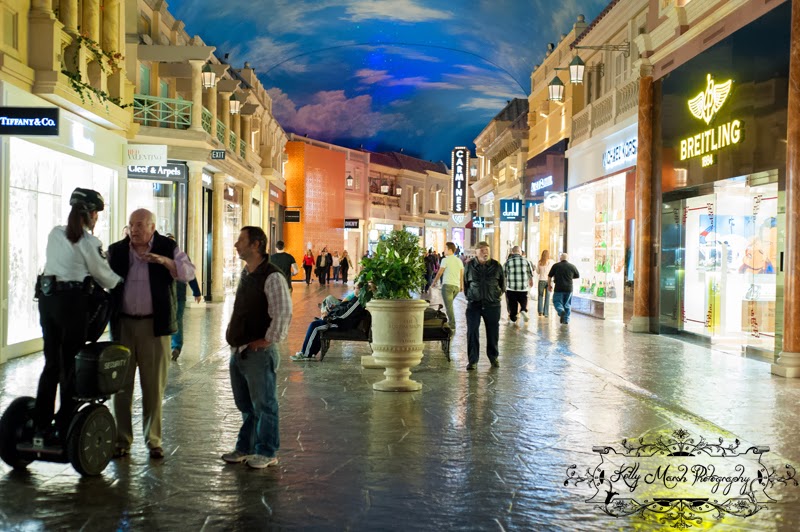 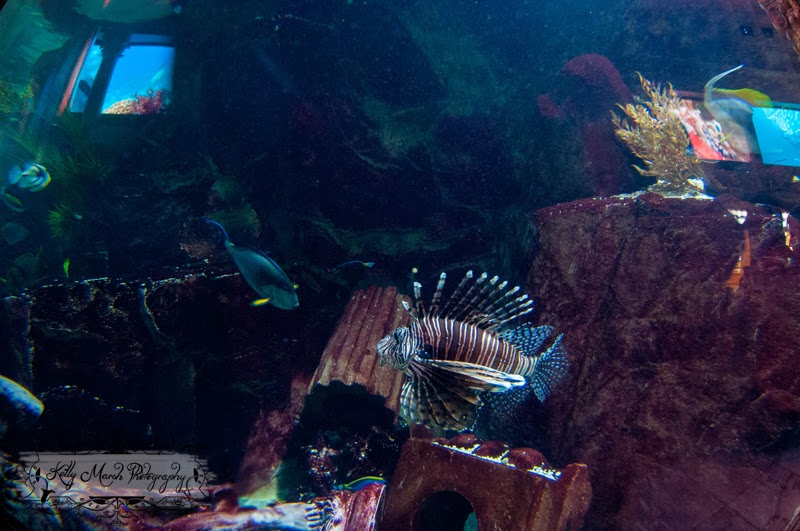 Aquarium in Caesar's Palace located on the back side of the Fall of Atlantis fountain. 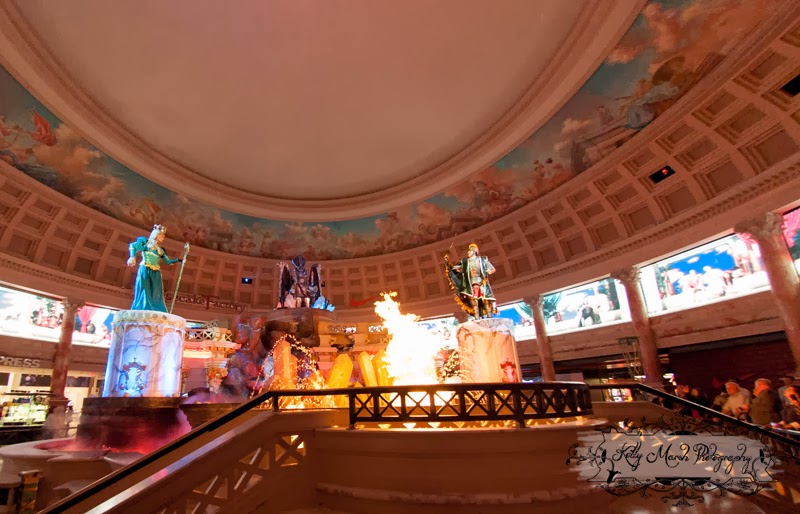 The free show, The Fall of Atlantis, is an animatronic production about the fall of Atlantis complete with fire, water and a fun story. The animatronic figures need a bit of an upgrade as one of the King's fingers (ironically enough I think it's the middle one) was broken and flapping around. Also, the daughter's clothing was flapping away from her body. 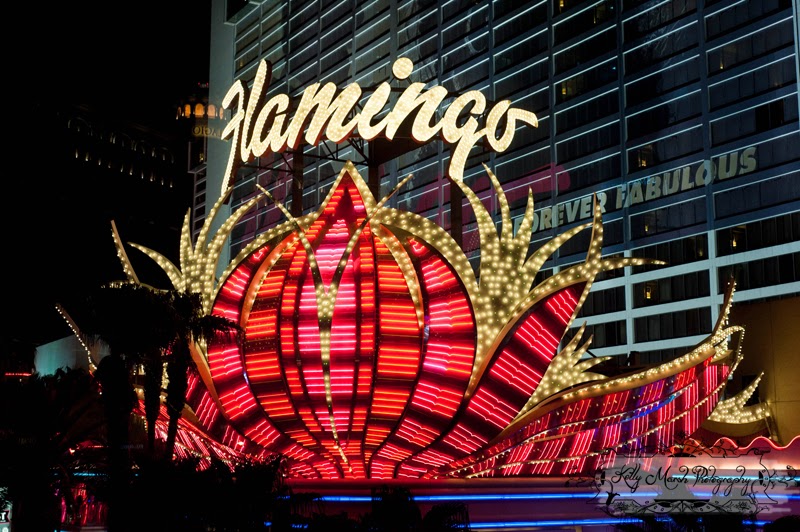 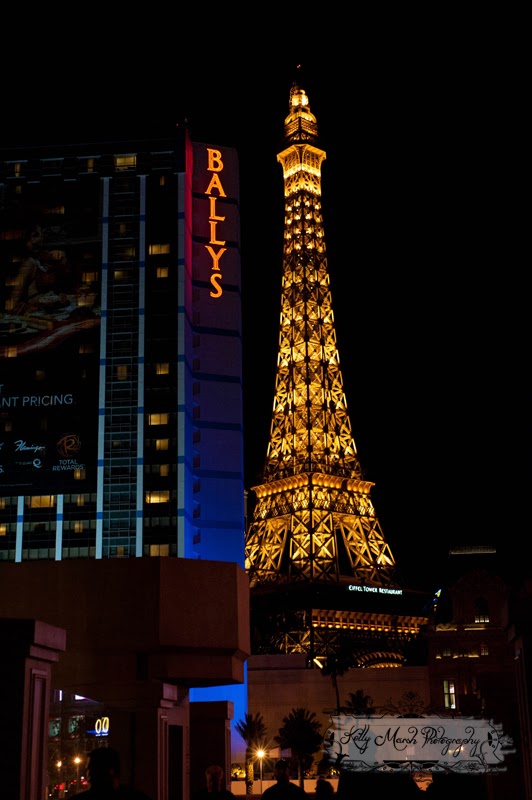 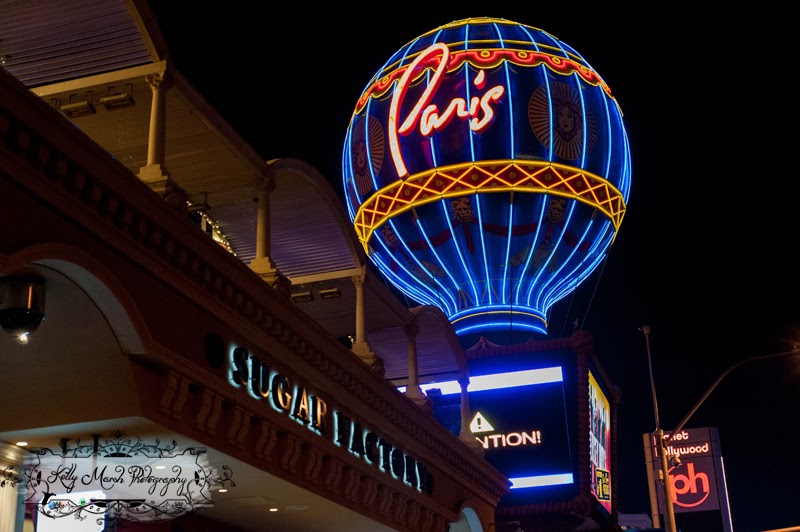 * The Luxor emits the single brightest light source that can be seen from the international space station,
projecting 275 miles in to the sky.

*Be careful when walking the strip at night, there are a lot of people out to take advantage. I had a woman,
who along with an older man and another younger woman with a stroller and a toddler, circle around me
asking for .50 or anything to buy diapers for the kid.

*Also, there is a relatively high homeless population in Las Vegas. Most of them are harmlessly looking for a
hand and hang out on the pedestrian walkways, while others can be a little more aggressive (luckily I didn't
have a problem with the latter).

If you'd like to see more photos from Las Vegas, click here.
Posted by KMarsh at 6:54 PM